This is going to be a real tribute to the legendary Boston POPS conductor Arthur Fiedler. From the dancelike sounds of Dvorak Slavonic Dances, to the electrifying music of John Williams and Leonard Bernstein, this concert will take you on an incredible journey you will never forget. The heart of the concert will feature Gershwin Rhapsody in Blue with brilliant pianist Jessica Choe, who will mesmerize you with her virtuosic playing. 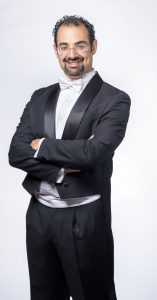 A native of Israel, Yaniv Attar is the 1st prize winner of the Duna Szimfonikus Conducting Competition Budapest, and the recipient of the 2010/2012 & 2014 Georg Solti Foundation US Award  and the 2009 Bruno Walter Memorial Foundation Award. Attar is the Music Director of the Pennsylvania Chamber Orchestra, and Music Director of the Whatcom Symphony Orchestra in Bellingham. In addition, Attar is also an Artistic Partner with Northwest Sinfonietta. Highlights of past seasons included collaborations with artists such as Alesio Bax, James Ehnes, Tine Thing Helseth, Sharon Isbin, Alex Klein, Jennifer Koh, Johannes Moser and Gil Shaham. Attar was also one of 10 conductors from around the world who were  invited to  INTERACTION, and conducted an orchestra composed of all of Germany’s top orchestras, including the Berliner Philharmoniker, Konzerthaus Orchestra, German Symphony Orchestra, and the Radio Symphony Orchestra Berlin. Prior to his current music directorships, Attar completed his two years residency as the Assistant Conductor of the Alabama Symphony Orchestra, where he conducted nearly 100 performances, and worked extensively with Maestro Justin Brown.

Attar is also an accomplished classical guitarist.  He has studied under Irit Even-Tov, Charles Ramirez and Sharon Isbin, for whom he served as teaching assistant at the Aspen Music Festival from 2003 to 2005. Attar was the first guitarist to win the Aviv Competition Prize in Israel and the Concerto Competition at the Juilliard School. Attar plays a 2014 Dake Traphagen Guitar. His studies have been generously supported by the America and Canada Israel Cultural Foundations, The Williamson Foundation for Music, Ronen Foundation, The Olga Forrai Foundation New York, the Morris and Beverly Baker Foundation, AVI Fellowships Switzerland, the Rislov Foundation, and the ISEF Foundation.

Korean American pianist Jessica Choe began her musical studies at the age of 3 in Seoul, Korea where she was a prize winner in several national piano competitions including the Samick National Piano Competition, the Korea Daily Times Piano Competition and the Korean Department of Education Music Competition.  After immigrating to the US at the age of nine, she performed throughout the United States in such halls as the Kennedy Center for the Performing Arts, Seiji Ozawa Hall at Tanglewood, Lincoln Center and the Barns at Wolf Trap.

In the 2003, Jessica made her European debut at Fondation Bemberg in Toulouse, France, and her New York recital debut at Carnegie Hall, both under the auspices of La Gesse Foundation.  Jessica has performed solo recitals in France, Italy, Switzerland, San Marino in such halls as Teatro Concordia, I Tatti, and Salle Frank Martin.

Jessica holds a Bachelor of Music from the Peabody Conservatory of Music of Johns Hopkins University and a Master of Music from The Juilliard School, where she studied with Herbert Stessin, Benjamin Pasternack and Eleanor Sokoloff.